Within the Influence Professional system there are various placed where the system can show/calculate NI (National Insurance), WTD (Working Time Directive) and also pension contributions.

It is possible to record rates (%) for each of these elements within the system and these will be used in the calculations.

It should be noted that the NI figures calculated by the system are estimates based on the assumption that workers will be paying NI at the recorded rates. For actual NI contribution figures you would need to consult your payroll system.

There are a couple of places in the system where you can record these NI/WTD/Pension rates.

Within the system parameters it is possible to setup some overall rates which will be used in the calculation of NI/WTD/Pension.
Select the parameter set called "PAYROLL" then select the tab labelled 'Real'.

In here you can set rates for NI, WTD and Pension.
If you have setup any rates using the Parameters (Above) they will be pulled-in to here and set with no DATE. You can add additional rates with an effective from date if any of these rates change in the future.   (See below) 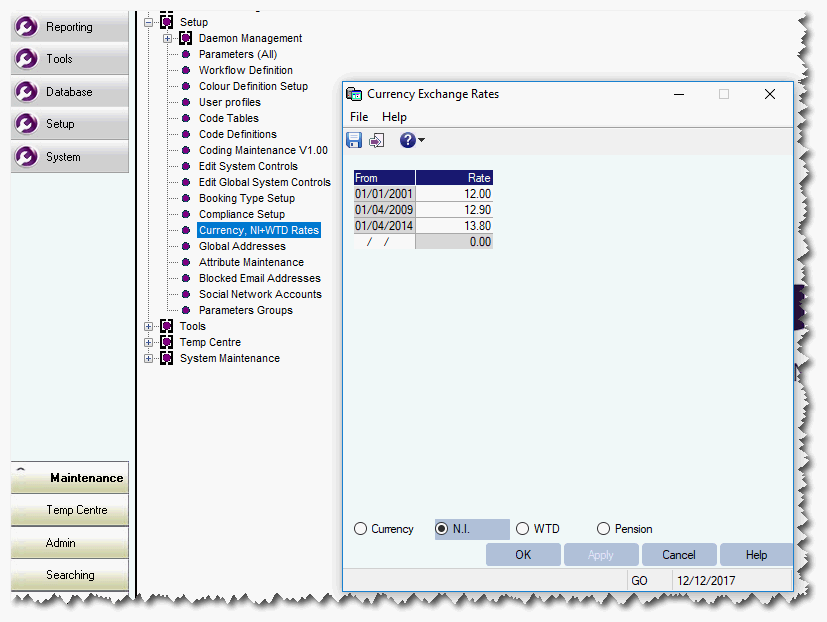 Where are they used?

These rates are used in calculations in a few places within the system. Some of the common places are listed below.

a) On the RATES section of TEMP vacancies

At the top right of a TEMP vacancy the system will display rates and show the NI/WTD values. (See below)

(On older systems the RATES are displayed slightly differently)

b) From the Calculator icon in the Toolbar

In the Toolbar at the top of the screen is a calculator icon. Clicking this opens a calculator which will allow you to calculates Pay Rates, Charge Rates and Margin %, and also display the NI and WTD values as well as the Pension contribution amount. (See below) 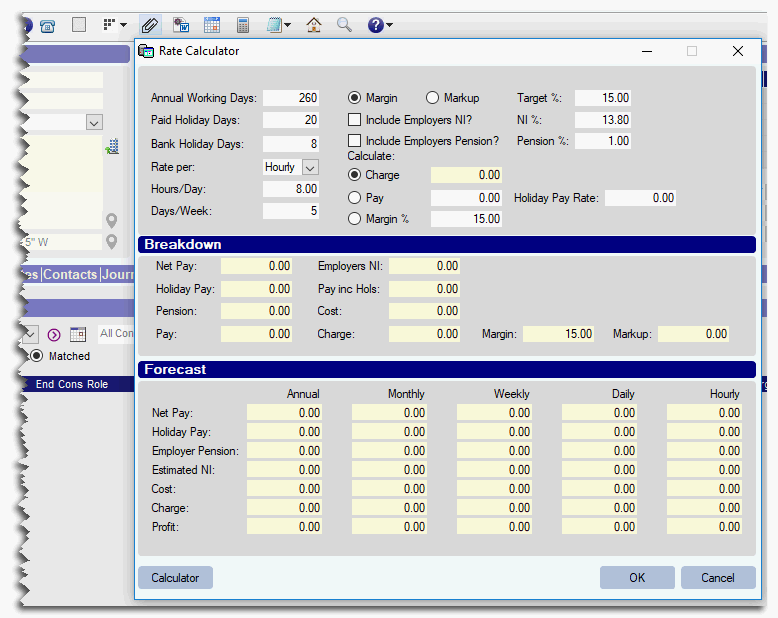 c) From the Timesheet Entry screen (if using TEMP bookings)

In the Timesheet Entry screen the system displays totals for NI/WTD for the displayed bookings. (See below)

NB: These figures are estimated only and are based on the assumption that relevant workers would be making NI contributions, which may not be the case. For actual figures you must consult your payroll system.

NI is estimated for workers who are setup as PAYE; those who are set with a Pay type of Ltd Company or Umbrella will not be included in the estimated figures shown at the top right.

d) From the Rates page of a Client record.

Within a Client (Company) record it is possible to setup Pay/Charge rates for Roles. This [Rates] page will display the NI/WTD % for those rates.

NB: For older systems user the older (version 1) style rates, it is possible to show the NI/WTD% or to have this hidden.  It is controlled with parameter Payroll, Flag(19)
(See below)

In the example above you can see the older style of Rates with the NI/WTD shown.